The Board of Law Examiners is operating remotely. Please submit all documents and payments electronically or by mail.

For the latest information about COVID-19 and the impact on the Uniform Bar Examination in Tennessee, as well as information about deadlines, click HERE. A new exam date has been added. To access without using the link above, click on “Tennessee Board of Law Examiners Index” or “Menu” and scroll to the link for COVID-19 Announcements.

4/17/2020: The Supreme Court announced today that, in addition to the July bar examination currently scheduled to take place July 28 – 29, 2020 (the “July Exam”), the Board of Law Examiners will offer an examination on September 30 – October 1, 2020 (the “October Exam”). Those wishing to take the October exam must submit the July 2020 Admission by Examination application and select the October Exam location. The initial deadline for July 2020 applications is May 1 and the final deadline is May 20.

For additional information regarding the July Exam and the October Exam, please visit our COVID-19 Announcements page.

The link for Law Schools to use to upload completed Law Degree Verification Forms is now available. Law School Officials responsible for completing the forms should email the TBLE office for the link. Please save each form as a separate .pdf file, named: student-last name_student-first-name_Law-School-name_LDV.pdf prior to uploading the document.

NOTE: This link is not for Applicants to use. Applicants upload documents to their Application in Synergy.

The Board approved amendments for recommendation to the Supreme Court to Board Policy P-6.02, setting the size of Investigatory Committees, and adding new policy P-12.01, “Ethical Considerations.” Two technical amendments, a typographical error in P-3.02 and deleting a provision now included in Rule 7, in P-4.07, were recommended as well. The Supreme Court approved these recommendations on March 25, 2020. The revised Policies and Procedures have been added to the website under Governing Authorities.

In the top bar of each page is the site index, “Tennessee Board of Law Examiners Index”

that includes links to pages for each Primary Category:

For small screens in the upper right corner, you will see “Menu” 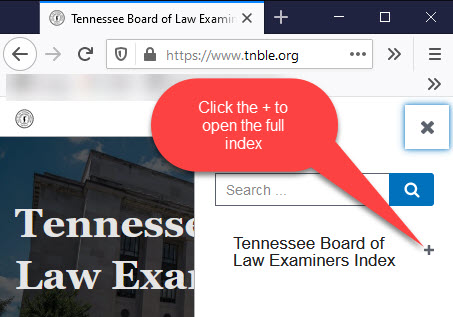 Upon clicking the link for a Primary Category you will be taken to a Directory Page with descriptive links for how to apply for each type of admission, practice pending admission or supervised practice information, as well as additional information regarding admission and application requirements. FAQs, forms and links to Governing Authorities are also included on the Directory Page. For Exam Information, click the link for Admission by Examination Score to find pages dedicated to exam sites, schedules, and successful applicants. At the end of each page are quick links to the Index, directory pages and FAQs.

A new General Instruction Manual for bar examination applicants has been emailed to applicants and added to the website here. Please scroll to the end of the page for attachments. The Manual includes all of the information regarding bar exam registration, required items, permitted items and prohibited items, as well as a schedule of testing, the security policy and the honor pledge. The Manual also provides information regarding post-exam interview requirements and grade release. Applicants for the February 2020 exam must upload the attached Acknowledgement to their Synergy application by February 24, 2020, even if they have previously taken the bar examination in Tennessee.

Please see the step-by-step instructions for admission by examination available on this website and Board Policies and Procedures P-3.01 and P-3.03 for documents that must be mailed or delivered to the BLE office and what constitutes timely receipt.

The Board will review online payments at 3:00 p.m., Central time, on the day of the Final Deadline, and will attempt to provide notice to anyone who has submitted a payment that is not successful. No notice will be given to those paying after 3:00 p.m. Payment by check, money order or cash is accepted at the Board office during regular office hours of 8:00 a.m. until 4:30 p.m. Central time.

Online payment of the Tennessee application fee is accepted and you will be directed to that page upon completion of the Tennessee application. This is a separate application and a separate fee from that paid to the NCBE for the Character and Fitness (Background) Investigation. The Board will review online payments at 3:00 p.m., Central time, on the day of the Initial Deadline and the day of the Final Deadline, and will attempt to provide notice to anyone who has submitted a payment that is not successful; no notice will be given to those paying after 3:00 p.m. Payment by check, money order or cash is accepted at the Board office. Office hours are 8:00 a.m. until 4:30 p.m. Central time.

The list of successful bar exam-takers can be found on the Board of Law Examiners website here. Exam-takers will receive a letter from the Board with details regarding their scores and next steps in the admissions process.